Showing posts from February, 2018
Show all

February 25, 2018
Banaras. A city confused between the history of its mythical past, present day religion and religious ceremonies, and the influence of modernization and the West. In under ten minutes you can go from feeling as if you’ve stepped into history, to suddenly a dejavu resemblance to yet-another- modern -Indian-city. From sitting in an electric rickshaw to spotting cycle rickshaws and normal autos, Olas and Ubers, pass by a Domino’s surrounded by several small vegetable stores, handicraft stores and pharmacies, see a Pantaloons or a large city mall, and in no time reach super crowded streets queued up by people in hundreds to visit yet another mandir. And if you walk a little further, you’d find yourself by the Ganga at a funeral ghat. All in 10 minutes. The city is full of color, graffiti-ed with imagery of Shiva, life all around you is alive - busy streets and constant honking, people rushing about but stopping for a second to pray as they pass the dozens of temples on every street. I
Post a Comment
Continue reading »

February 22, 2018
The Land of the Bholenath. You may be outside a temple, walking the busy streets across the Lakshman Jhula, or be sitting by the Ganga, you are bound to find a Sadhu, a hippie in the strangest of clothing, or a local in his everyday attire casually slipping a kash of ganja. The story of how Rishikesh went from becoming an Above of Gods and a land of several myths and legends to the Yoga capital of the nation and a place to let your hippie side out is particularly interesting. The Beatles came in search for answers to life’s larger questions in 1968, and ended up performing transcendental meditation - I’m certain they were merely stoned, and were given the freedom to sit and ponder by the holy Ganga - but it’s here they wrote their most famous album, the White Album. There was then a second wave of foreign artists coming in search for a story of their own, and this is where the locals realized these visits could become a major tourist attraction. There are now a dozen privately
Post a Comment
Continue reading » 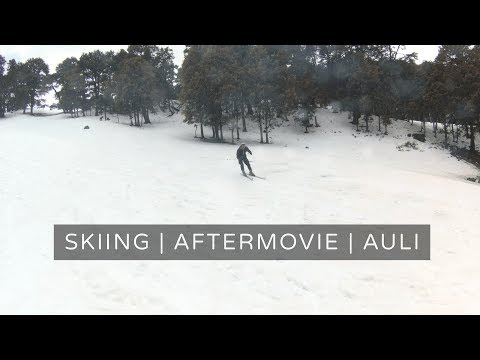 Auli is India’s ski destination. It’s at an altitude of 3300 meters at the base, and touches 3800m at the peaks, it has the right ski infrastructure - ski lifts and chair cars, and even a ropeway certified by a Swiss cable car agency, it has the perfect ski slopes - slopes where India can host International winter games, half of them man-made, the other half natural slopes, and oak forests all around preventing greatly the possibility of avalanches. It really is a perfect ski destination. EXCEPT, THERE IS NO SNOW! We humans have messed this world up. It isn’t snowing during the months it should, and when it does the snow contains too much water for the snow to last till Summer begins, causing muddy slush everywhere you walk. During the 1970’s, Auli used to receive an average of 10 feet snow every year. Till 2010, it reduced to about 2-3 feet of snow on the ski slopes. During this period, the Uttarakhand government set up all the ski infrastructure and made international level
Post a Comment
Continue reading »

February 10, 2018
It’s been a year working in the hectic life of a startup, and now I need a break. Early October, the monotony of routine and work life started to hit me. I was working far too much for far too many hours a day, and could feel the weariness and lack of productivity set in. I needed a month off - I was certain a month without thinking of thermal imaging, Android, stabilization and cameras would help me hit the reset button. I was extremely nervous when I went up to my manager. I had practiced asking this for weeks, played out the conversation in my head a hundred times, I knew exactly how I’d build the story and the tone I’d use for each sentence, and how I’d make it sound convincing enough that I really need time off . When I finally asked him I was surprised at how casually he said “4 weeks? Sure - you didn’t need the story, you just had to say you want 4 weeks off.” And so here it begins! I’m taking a month off to travel the North India, and Bhutan. I’m really looking forward
Post a Comment
Continue reading »

I'm not an Android Dev Anymore

February 08, 2018
tl;dr: I merely use Android as a platform to write software, and that’s where the subtle difference lies. Yes, I write code that runs on Android, but this doesn’t mean I’m an Android developer. I’m glad this realization has struck. My first hand at writing useful code was during my freshman year simply so I could ask my father for an Android phone; I had a Windows Lumia then and it sucked. I started out with simple games and to-do applications, and gradually wrote and contributed to over a dozen applications specifically developed to run on Android and to be published on the Android Playstore - this included making Android variants of websites using their REST APIs, creating replicas of already existing iOS apps. Developing Android-ized experiences of a larger set of software comprises of the work an Android developer does. In the past year however, I’ve shifted to reading research papers and writing POC implementations, research models on Android, merely because I know
Post a Comment
Continue reading »

Caged in the City