Showing posts from May, 2019
Show all

It took me a good week or so after going through the first 3 videos of the FastAI course for it to click in my head as to what was going on in a neural network. And now, the basics feel very foolish. On the side the past few weeks, I've been doing algorithmic and data structure problems for fun*, and I thought it might be fun to see if a neural network could solve some of these problems. And so, I started out with trying to predict the largest continuous sum in an array . But to define it better , I'd make sure the array only had 100 numbers. But 10 numbers are easier for me to visually see . And so, the array would only have 10 numbers. Shortly after I realized that debugging this would take me too much time , and so I had to think of an easier problem. Okay, how about finding the largest number of a list. But, a regression problem is most likely going to give random numbers, and I'll have to use silly metrics like RMSE which don't make too much sense in a
Post a Comment
Continue reading »

What 3 Weeks of Deep Learning Have Taught Me 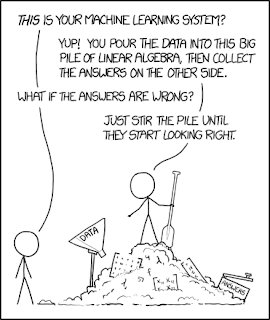 I've almost completed the FastAI course for deep learning, and here's a list of things I've learnt: Deep learning is far from magic . So far I was convinced there was more to deep learning than just matrix multiplications and 11th-grade math. 3 weeks haven't shown me the signs. It's hard, or it feels like magic because humans struggle to visualize beyond 3D space . And so, for my first project, I made a simple classifier that predicts the maximum number from a list of 2 numbers. This can be visualized in 3D. More on why I did this in another blogpost, but in 3 lines here's what I learnt: [activation(input x weights + bias)] many times  = output loss = how off the output is from what it should have been, differentiate loss with the weights, and keep fixing the weights, until you're happy.                                           The truth is, you'll never really know if you should be happy with your output.  That's because don't
Post a Comment
Continue reading »
More posts