A Deep Learning Classifier for FIFA vs Real Football 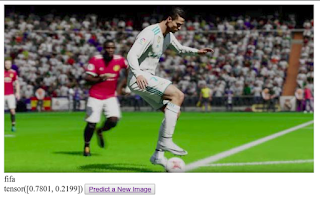 I took up the FastAI course a week ago to finally do some hands-on, state of the art, 10-lines-of-code-does-it-all deep learning. I took up many courses in college, joined Kaggle a good 4 years ago (sigh - the only problem I ever solved was the Titanic dataset and honestly didn't find it as fun as making an Android app), and now that I've made up my mind to do more DL, I want a taste of a regular deep learner engineer's everyday job. More on that later, this post is just about identifying whether an image is from FIFA or not.

Here's the why:
I've played FIFA all my life, starting with FIFA 2001 on my PlayStation2. By the time FIFA06 came out, my father used to say it was hard to make out from afar whether I was playing or watching football on TV. And so, I thought it'd be fun to see if a computer could do this.

What I did:
1. Ran a script to scrape URLs of the top 200 images on Google Images for FIFA, and another 200 on the English Premier League and the world cup in 2018.
2. Put up all the URLs of one kind in a single csv file.
3. Used resnet34 because pretrained neural networks that already know a lot of things do a great job at learning new things.
4. Used fastai's cnn_learner for doing transfer learning for 10 epochs, doubled the size of the images, fine-tuned a little. [The italics because it's really not as fancy as it sounds.]
5. Exported the model file and created the webapp on my website. Source code on GitHub!

HOSTING WAS A PAIN! 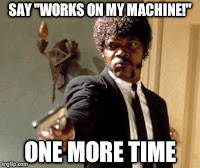 Aaaaaagh uploading this to my website took me the whole weekend! Worked on my machine. Thought it'd be a 10-minute job on Heroku. 😠
PyTorch, Numpy and Scipy together take up 450MB, leaving me no space to host the web app on Heroku.* I ended up doing this:
1. Compressing all images using tinypng because it just does such a great job. I made a simple commandline tool for it.
2. Compressing all videos using ffmpeg. It does such a great job at it.
3. Used the CPU only version of PyTorch and made sure not to freeze my dependencies into the requirements.txt, and used

Aaaand why it fails: 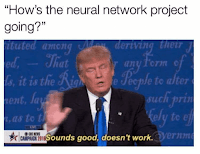 - Technically, this isn't a regular classifier. You're not looking for cars in an image. You're looking at the image on the whole. The cnn_learner is looking for patterns/similarities/common shapes in all the images, but my data set didn't exactly have the same shapes/objects in the images.
- I'd say this problem is similar to trying to classify black and white images from color images. If the network doesn't realize you're asking it to observe the colors, it'll most likely end up finding other patterns in your dataset.
- Which is what led me to trying to classify thermal images from visible light images, and it failed miserably too. But I'm going to stick at it and hopefully by the end of the course I'll be able to come up with something I'm happy with!

* In a good world Heroku should just have Docker images for regularly used dependencies and they shouldn't count in my Heroku hosting space.

Authenticating a user can be frustratingly tricky at times. I use Firebase all the time to do all server related tasks - I used to create my own Python Flask server prior to this. You literally have to write no server side code, and it's all for free.

All steps at the Firebase Auth documentation are straightforward, except for the part that requires you to add the google-config.json with correctly configured SHA1 key. I got stuck at this one point, and I'm certain most developers will at the same place. It took me hours to do this the right way.

Here's what you do :
Firebase Auth requires SHA1 fingerprint of your release keystore.
Run the keytool command given in the docs.

A Letter To An Old Love

October 15, 2019
Maybe I'm over-romanticizing it,
Maybe I'm not.
Maybe we never know what we have until all we want is what we don't have
Maybe we knew and maybe we loved it

I don't miss you.
I miss the idea of you.
Maybe we can't ever go back to it
Maybe someday we might choose not to

I want our ground.
And I want you there.
I want it to rain a little,
and then for it to stop.

And for us to talk and not just speak.
Of things that mean nothing,
but mean everything to us.

Maybe they weren't of any importance to anyone.
Maybe we never cared.
I might throw it all away once I have it again.
Maybe you will do the same.

All I want is to think out loud.
And discover my thoughts all over again.
Without you trying to convince me of anything.
Without me trying to assert or force what I feel.

It's surprised me every time I think of it.
How you and I were the best at what we were.
And then we were strangers.
And how we still are.

Love is transient
and is something I don't understa…
Continue reading »

Things I Could Do (ft. Homer)

While I sit and laze on the comfort of my three seater sofa,
I think to myself, as all great men before me have,
I should be making great use of this perfect Sunday afternoon.
The sun is out, the birds have chirped all morning,
I woke up on time, and I don't have any laundry to do today.
Now you see, a day like that is a day that's special.

I look around, I see my phone.
The thought of doing something great passes by for a sec,
as I unconsciously pick up my phone for a quick peek.
I forget my plans to conquer the day in the moment,
and as all jobless men before me have, I scroll through Instagram.
Not that I really care for Kendall's yet another magazine cover,
or my friend's dachshund being a little extra cute.
Some of those Spongebob memes are really rewarding though.


It's just that my brain needed slight off-tracking,
to make sure I feel guilty and curse at myself
for not making great use of this great day where the laundry is already done,
and I have salad in …
Continue reading »